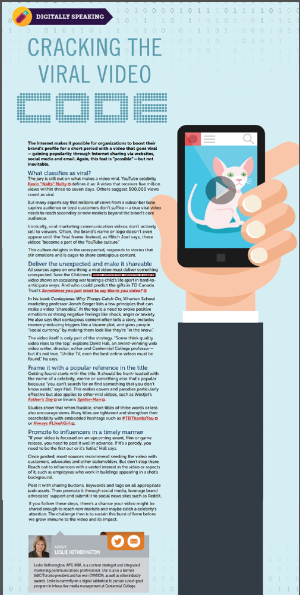 In early April, I published a ‘how to’ article on viral video for IABC/Toronto’s Communicator.  Download a PDF of the article or read the expanded version below, citing current insights and 2014 viral hits.

The Internet makes it ‘possible’ for organizations to boost their brand’s profile for a short period with a video that goes ‘viral’ – gaining popularity through Internet sharing via websites, social media and email. Again, this feat is ‘possible’ – but not inevitable.

What classifies as viral?

The jury is still out on what makes a video ‘viral.’ YouTube celebrity Kevin Nalty’s defines it as: A video that receives five million views within three to seven days. Others suggest even 500,000 views over a few weeks provides tremendous value.

Other experts say that millions of views from a subscriber base, captive audience or loyal customers don’t suffice. A ‘true’ viral video needs to reach secondary and new markets beyond the brand’s core audience.

Ironically, viral marketing communication videos don’t actively sell to viewers. In many cases, the brand’s name or logo doesn’t even appear until the final frame. Instead, as Mitch Joel says, these videos “become a part of the YouTube culture.” This culture delights in the unexpected, responds to stories that stir emotions and is eager to share contagious content.

Deliver the unexpected and make it shareable

All sources agree on one thing: a viral video delivers something unexpected. Save the Children’s Most Shocking Second a Day video uses escalating disruptions to show war tearing a child’s life apart in hard-to-anticipate ways. And who could predict the thank-you gifts TD Canada Trust’s ATM gives in its Sometimes you just want to say thank you video?

In his book Contagious: Why Things Catch On, Wharton School Marketing Professor Jonah Berger, lists a few principles that can make a video ‘shareable.’ At the top is a need to evoke positive emotions or strong negative feelings like shock, anger or anxiety. He also says contagious content often tells a story and includes memory-inducing triggers, like a familiar term or bizarre plot that keep it top-of-mind and compelling to share. Contagious content also gives people ‘social currency’ by making them look like they’re ‘in the know.’ Similarly, sharing charitable or socially conscious videos gives people a feeling of altruism by association.

The video itself is only part of the viral code. Positioning, timing and targeting the right audience also play key roles in spreading a video.

“Some think that quality video rises to the top,” explains David Hall, an award-winning web video writer, director, editor and Centennial College professor – but it’s not true. “Unlike TV, even the best online videos must be found,” he says.

Frame it with a popular reference in the title

Getting found starts with the title. It should be front-loaded with the name of a well-known event, meme, celebrity or something else that’s popular because “you can’t search for or find something that you don’t know exists,” says Hall. This makes covers and parodies particularly effective but also applies to other viral videos, such as Westjet’s Father’s Day, Evian’s Spider-Man or Turkish Airlines’ Drogba vs. Messi videos.

Hall notes the title usually tells the story or creates a sense of irresistible mystery. As with media relations, you can also look for various angles to appeal to multiple audiences and incorporate them in the description with relevant keywords. Studies show that when feasible, short titles of three words or less also encourage views. Many are tightened and made easier to find with embedded hashtags such as #TDThanks You or Always #LikeAGirl.

Promote to influencers in a timely manner

If your video is focused on an upcoming event, film or game release, you need to post it well in advance, ideally at the beginning of the week. If it’s a parody, timing is tighter. “You need to be the first out or it’s futile,” Hall says.

Once posted, most sources recommend seeding the video with your inner circle of customers, advocates and other stakeholders. But don’t stop there. Reach out to influencers with a vested interest in the video or aspects of it, such as employees who work in buildings appearing in a shot’s background.

Post it with sharing buttons, keywords and tags on all appropriate web assets. Then promote it through social media, leverage brand advocates’ support and submit it to social news sites such as Reddit.

With contagious content, effective positioning and timely promotion, there’s a chance your video might be shared enough to reach new markets and maybe catch a celebrity’s attention.