I met with D. again on the Saturday before the Monday when our prototypes were due.  At that point, I had  revised flow charts, a site architecture map, mobile screens developed for two scenarios and a few tablet screens.  D carefully reviewed my work and even though he initially said he only had an hour, he found the work interesting and delayed his departure by about 45 minutes.

He liked the work I had done but made a number of recommendations, based on the following principles:

Although it was tempting to save time and proceed with the wireframes I had, I couldn’t do so after D had flagged improvement opportunities.  This meant spending a good portion of Sunday revising the screens and working through the night to deliver the prototype on Monday.

With my prototype completed, I met later in the week with M. and two agency colleagues of hers: a content strategist (S) and a strategist (J). M had kindly set-up the opportunity for me to present my project and hear their feedback.  I introduced my concept with the banner designed for Digifest (as my project is part of the upcoming student exhibit) and then walked them through my prototype.  M. and her colleagues like the targeted focus of my project, its content and the UX features I’d incorporated.  They offered numerous recommendations to strengthen the solution and highlighted a few best practices to sustain.

Specifically, S. advised me to keep in mind the following best practices:

I was pleased by how supportive they were and surprised to hear J. say that with a few tweaks, my concept would be ready to move to the next stage of bringing a developer on board.  I didn’t think I was that close but who am I to challenge mentors with light years of digital experience on me? 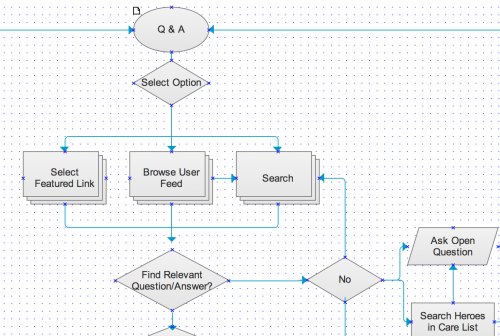 I met D., my UX mentor, last Saturday afternoon for two hours in a coffee shop near his home. The pre-agreed purpose of the meeting was to introduce him to my senior project and walk him through my preliminary work on it.

He quickly grasped the project’s concept and purpose to enable caregivers to share proven recommendations and resources with each other. I had various documents on aspects of the project but not surprisingly, he was drawn to the visual materials. D. wanted to start with my personas. He said they were well thought out and looked professional. For future scenarios, he recommended breaking each into smaller chunks, which are easier for a UX designer to reference when developing wireframes.

He reviewed the user flow diagrams in detail and made several suggestions, including:

For my wireframes, D suggested limiting horizontal buttons on mobile screens to three and to strive for more white space. He recommended Designing Social Interfaces, by Christian Crumlish and Erin Malone, as a great reference for social solutions. This is particularly helpful as early on I searched for UX resources specific to social and came up dry.

My biggest challenge with senior project is time, as I thought we would have more time this semester to focus on development.  D. suggested shaving time by using Axure for the prototype instead of formatting it in a separate tool, as I’d initially planned.  He also recommended proposing varied stages for the solution to manage breadth of scope and avoid scope creep.

D. has agreed to meet me again but as his best time is weekends, we can’t meet again until April 11. This is two days before my senior project is due for my semester mark. However, as I’m looking at phases, I consider this the deadline for phase one. I can iterate further for phase two, which is when I will show it as part of a digital show’s student exhibit in early May.

I also heard back from M. with a date to meet with her and a content expert just after the semester deadline for senior project. However, I can apply any advice I glean from this meeting to phase two. 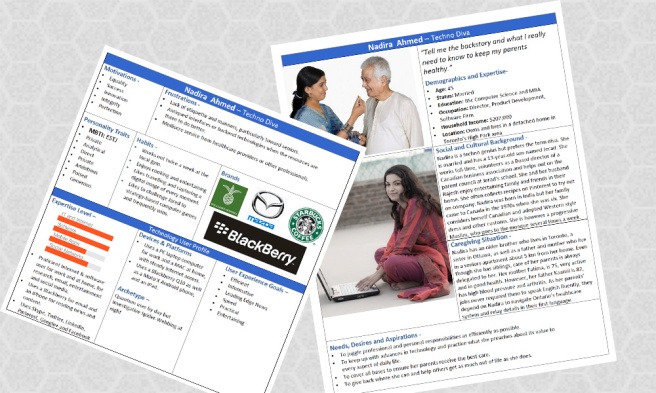 Unless an interactive solution meets a human need or desire, it’s just a surge of energy-sucking pixels. To prevent this, you need to start with personas. According to the UX Lady, personas “identify real users’ profiles’, needs, wants and expectations” and help us answer ‘what’ each would do when faced with decisions, both on and offline.

My senior project is to develop a niche, social media network to help informal or unpaid caregivers (i.e., people who are responsible for overseeing the care of family members or other loved ones), specifically those who care for senior citizens.

Many of these caregivers are 45 to 65 years-old and called the ‘sandwich generation’ because they’re raising their own children, while caring for elderly loved ones. According to studies, these caregivers make up a fifth of Canadian professionals and are often “short of sleep, grumpy….and take it out on customers and colleagues at work,” but they are more than this. They are diverse people, living multidimensional lives.

To find answers, I developed personas, based on composites of more than a dozen caregivers I know personally, plus many I’ve read or learned about through recent research and my communications work with Ontario’s Community Care Access Centres.

I built these personas using a hybrid mix of templates from the UX Lady, creative agency Fake Crow and our interactive media course last term. I also reviewed other personality models, such as Microsoft’s archetypes for cross-screen engagement, which I thought particularly relevant to tech savvy caregivers juggling home and work tasks; I thought how each type applied to caregivers I’ve met. From these resources, I identified, merged and created categories that touched on characteristics, such as their goals and frustrations, that can inform ‘how’ I build a social network to support their caregiving needs.

When I presented my personas for the class critique, much of the feedback centred on Gillian. I made her proficient at searching for answers online but lacking any kind of mobile phone.  My classmates thought it impossible that someone who was a senior’s lifeline wouldn’t have embraced the convenience of mobile. However, I based this persona on a real, digital immigrant who didn’t user computers until she was 32 and finds the consistent presence of devices, in boardrooms to diningrooms, offensive. Having heard similar objections from other Baby Boomers, I don’t think Gillian is an anomaly but I tweaked her persona to be more ‘open’ to mobile — someday.

I think including less affluent/non-professionals was the most important suggestion and adjusted my personas accordingly. I stayed with the ‘sandwich generation’s’ age range based on my research but will consider younger caregivers as a secondary audience for my overall solution.

One of the best ways to hone progressive skills is to learn from leaders and build on their best practices. Interactive media is no exception and reading relevant blogs is an effective way to do this. As my senior project is a niche, social media healthcare solution, I want to hear insights from:

If it existed, my ″ideal″ influencer would focus on UX design for consumer-focused social media networks that improve overall health.  Short of that, I think these UX experts/blogs will offer great tips as my project evolves:

2. Healthcare Leaders Mastering Social Media – As one of the latter disciplines to adopt social media (due in no small part to privacy issues), experts in this area are true pioneers, overcoming numerous opposition to achieve success. In this category, I’m going to follow Kevin Pho MD, who practices primary care at the Nashua Medical Group in New Hampshire. An active blogger, Kevin explores where medicine, health care and social media intersect. CNN named @KevinMD as one of its five recommended health care Twitter feeds. He also has profiles on Facebook, Google+ and LinkedIn.  (I’m following/liking him on all his social profiles at this point, except LinkedIn, as doesn’t know me — yet.)  All these accolades make him a solid bet for my attention. More importantly, Dr. Pho is the founder and editor of KevinMD.com, a blog endorsed by the Wall Street Journal, Forbes and the New York Times.  Although many of this blog’s articles touch on technology/digital, I like the way its social media articles are grouped in one area making them easy to find and check for best practices dealing with this sometimes sensitive topic.

Since I need to think ahead on ‘how’ I will bring my senior project solution to market, especially through social media and community-focused strategies.  The best resource for doing this, who I have followed for some time, is Beth Kanter. Beth has written many books, is on the UN’s list of most influential bloggers and both Fast Company and Business Week have endorsed her as a social media expert.

She regularly posts on Beth’s Blog: How Nonprofits Can Use Social Media, one of the longest running blogs for nonprofits. It’s filled with practical examples that I can likely apply to my project.  I follow Beth’s Twitter, Facebook, Pinterest, Google+ and You Tube feeds.

I’m hoping that watching and heeding the advice of these experts will keep me on a track to success with my senior project.